So, for a kernel of width N and an image size of W*H pixels, the convolution requires (N*N)*(W*H) texture fetches. This will quickly become impractically slow for realtime use - at 1080p even a small 5x5 kernel would require 51,840,000 texture fetches…yikes.

Some kernels are separable, which means that the matrix of weights can be expressed as the outer product of two vectors:

Separable kernels are useful computationally because a convolution by an N*N kernel can be split into 2 successive convolutions by an N*1 and 1*N kernel (a horizontal pass followed by a vertical pass). That’s (N*W*H)+(N*W*H) texture fetches which is significantly more manageable - 20,736,000 fetches for a 5x5 kernel at 1080p.

A common trick is to exploit hardware texture filtering to combine adjacent pairs (or quads for the 2d case) of texture fetches into one bilinear sample: 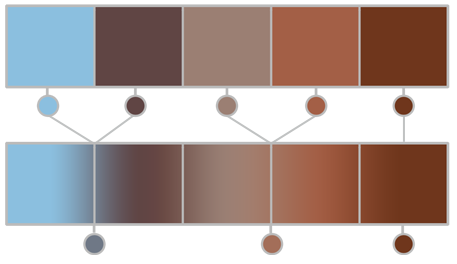 This reduces the kernel width to N / 2 + 1. Note that for this to work we must modify the kernel weights and the offsets used to sample the input texture. If we consider a pair of texture fetches at offsets o1 and o2 with their respective weights:

The combined weight for both samples w3 is the sum of the individual weights:

The offset can then be computed in terms of the weights:

This is basically lerping between the two sample offsets with respect to the weights. I provide code for computing the weights and offsets for 1d or 2d kernels in Appendix A (and the sample project).

This reduces the kernel width to N / 2 + 1, bringing us down to 12,441,600 texture fetches for a 5x5 kernel at 1080p. While this is a practical optimization for small, simple convolutions, it doesn’t work for more complicated operations which require dynamic weights (such as bilateral filters).

Suppose we’re using a compute shader to perform the convolution. Within each thread group, the convolution kernels overlap such that most of the texture fetches are redundant:

We can eliminate this redundancy by using group shared memory to cache texture reads. A basic implementation needs to load an additional N - 1 samples at the borders of the group:

The convolution can then be performed using shared memory access instead of texture fetches.

For a separable 5x5 kernel at 1080p this approach takes 2,479,680 texture fetches (with 64 threads per group). Careful consideration needs to be taken to achieve peak performance and eliminate redundant threads - see (1) and the sample project for details.

So far we have discussed optimizations which are appropriate for convolutions over a relatively small spatial domain. However one of the most important use cases for convolution is to blur an image, and in this case we very frequently want a perceptually large blur with good performance but without necessarily being an accurate Gaussian convolution.

The core idea is to prefilter the image by applying a small convolution successively into the mip chain of the source image. This could be as simple as a box filter:

We can then resample the prefiltered mipmap to approximate a large blur using a fixed number of samples. For example we could use a Poisson disk and calculating the area under each sample to select a mip whose texels cover a similar area:

Randomly rotating the sample kernel trades banding for noise, which can be trivially removed by temporal supersampling (basically for free if you already have temporal antialiasing). See the bonus slides of (4) for a wealth of information, particular ‘interleaved gradient noise’.

Note that with the improved texture cache efficiency of sampling smaller mips, the actual performance of this approach is close to constant with a varying blur radius.

The two functions below take an existing kernel and generate an optimized version for bilinear texture filtering.

An interesting point to note about Gaussian kernels is the standard deviation parameter sigma (σ). It’s easiest to understand this parameter by looking at how different values affect the Gaussian distribution:

The spatial domain of the Gaussian function is infinite, but we truncate it to our finite kernel size. Sigma is therefore important in order to correctly tune the distribution of weights within the kernel; the ideal sigma should be chosen such that the weights at the kernel’s boundary are the smallest nonzero weights for a given precision (e.g. 1/255 for an 8-bit image). Using a value of sigma larger than the ideal value produces a perceptually bigger blur but converges to a box filter. Using a smaller value than the ideal wastes samples because some of the kernel weights are effectively zero.